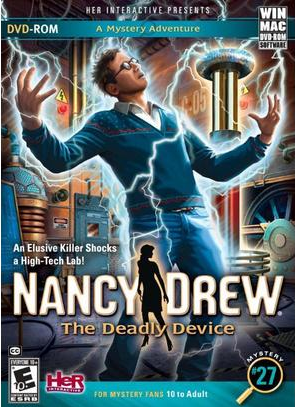 The Deadly Device was released in October 23, 2012 and is the 27th Adventure/Mystery game in the Nancy Drew PC games.

When an expert scientist is killed by an electric device called a Tesla Coil, Nancy Drew is put on to the task of putting the murderer behind bars. Exploring a dangerous laboratory, she finds herself highly unwanted and needs to arrest the culprit before the Tesla Coil reactivates.

Retrieved from "https://nancydrewpc.fandom.com/wiki/The_Deadly_Device?oldid=4797"
Community content is available under CC-BY-SA unless otherwise noted.